Christians: What if we’re the problem? 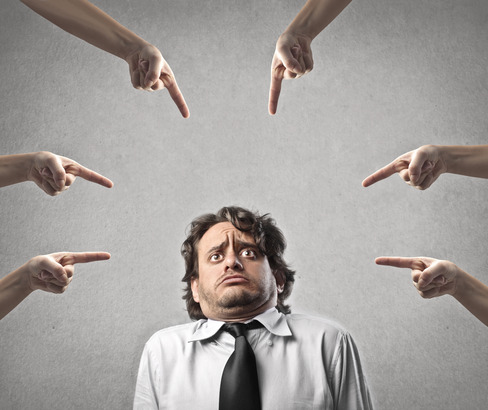 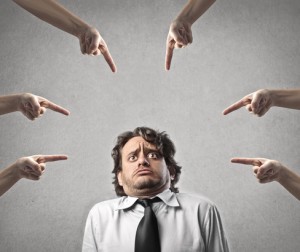 Unless you’ve been living under a rock for the past 24 hours, you’ve realized that there have a lot of people standing up for what they believe in, whether that be on Facebook, on the news, in the blogosphere, or (heaven forbid) in real life.

The “gay marriage” debate has been raging on in our country for decades.  Back in the 70’s, the Supreme Court dismissed a case before it would even be heard because it was seen as a non-issue.  Culturally, it was understood that marriage is something that happens between a man and a woman.  Today, things have changed.

This post isn’t about the rightness or wrongness of homosexuality or gay marriage–if you’re a Christian, that question is already answered pretty plainly in the Bible, and if you’re not a Christian, it’s just not the most important question you can be asking.

Instead, this post will explore how we Christians have been “doing it wrong” for a long time and it’s ripping our nation apart.  This is “family time,” so if you’re not a Christian, you’re probably going to think I’m nuts.  I’m okay with that if you are.

The State of the Union

Any rational American can look at the state of our culture and recognize that something is wrong.  As a society, we worship money, power, celebrity, and sex and, when we devote our lives to serving those things, the tragic outcome is a nation more divided and corrupt than it has ever been.

From a Christian perspective, we get this–we know what sin does to the world.  It sucks, but we really shouldn’t be all that surprised that our families are crumbling, the divorce rate is through the roof, more children are born out of wedlock than are born into a family with a mother and father, and we’re slaughtering children by the thousands each and every day.

The Bible records dozens of examples of wicked nations that were torn apart for far less–Sodom, Gomorrah, Egypt, Nineveh, the Israelites…  Nations full of jacked up, sinful people like us generally end up finding out that their actions have consequences.

And so, as a Christian, it’s easy to look around and shake our heads at the evil, immoral, corrupt, dirty sinners that have destroyed our once-great country.

We’re caught up in the wrong conversation

Simply put, we’ve been having the wrong conversation for a very long time.  We’ve had the luxury of a “cultural Christianity” since our Puritan forefathers settled this great nation of ours and, for more than 300 years, we’ve been able to maintain a reasonable level of morality through cultural norms alone.

Cheat on your wife?  The rest of the guys in the neighborhood would beat the crap out of you.  It was just something you didn’t do because the culture valued morality.  The problem with such a cultural Christianity is that the central message of Christianity–namely that it’s all about Christ–gets replaced with a cheap version of “morality” that’s based on being good or bad rather than the saving love of Christ.

So it’s not surprising that we’ve morphed into a culture of “social activists” with no objective moral standard.  We’ve been lazy and, instead of sharing the love of Christ, we’ve been having the wrong conversation.  It’s really easy to look at the world and say, “This is wrong, that’s a sin, and this other thing is an abomination.”  You’re right.  Homosexuality is unequivocally sinful.  Killing a defenseless child and calling it “choice” is disgusting.

But we will never win the battle if we keep removing Christ from the conversation and framing our faith in terms of what you’re supposed to do and what you’re not supposed to do.  Works have never, in the history of man, been the basis of one’s salvation.  It has always–always–been about Christ.

A Biblical lesson in judging others

Even if my non-Christian friends have never opened a Bible before, they know one verse: “Judge not lest ye be judged.”  Don’t ask me why they quote from the KJV, but they do and they know it by heart.

Of course, they take it completely out of context, because Jesus says in the very next breath, “For with the judgment you pronounce you will be judged, and with the measure you use it will be measured to you (Matthew 7:2, ESV).”  The point isn’t judgment, but hypocrisy.  “Judgment” is mentioned 340 times in the Bible, so it’s pretty big deal.

Cool.  So if you’re a vegetarian and your roommate pulls out a thick, juicy steak…  Get over it.  You need to conserve your energy. 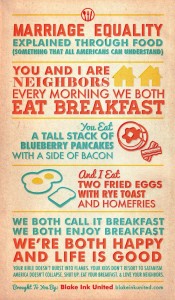 We tend to think of sexual preference like we do our choice of cuisine.  “Don’t like homosexuality?  Then don’t be a homosexual.”

On its face, then, it seems like the whole “who are you to judge” argument is valid.  I actually saw on Facebook today a post that said something along the lines of “Marriage is like breakfast.  You like pancakes.  I like eggs.  We both call it breakfast, we’re both happy, and life is good.”

Sounds wonderful in theory, but the whole analogy is self refuting and it crumbles when you put it into practice.  What if I liked polygamy?  Or incest?  Or little kids?  Even the most liberal of liberals would recognize that there’s a line that needs to get drawn when one’s preference is no longer a valid basis for one’s actions.

So there are things that are “off limits.”  Call it sinful, call it wrong, call it what you will.  The question is, how should we respond?  Paul goes on:

And all God’s people say “AMEN!”  (My Baptist friends get it.)  “This is what we’re talking about!  Shun the non-believer!”

—not at all meaning the sexually immoral of this world, or the greedy and swindlers, or idolaters, since then you would need to go out of the world.  But now I am writing to you not to associate with anyone who bears the name of brother if he is guilty of sexual immorality or greed, or is an idolater, reviler, drunkard, or swindler—not even to eat with such a one. For what have I to do with judging outsiders? Is it not those inside the church whom you are to judge? God judges those outside. Purge the evil person from among you.” (1 Corinthians 5:11-13, ESV)

And that’s when all God’s people say, “Oh, crap.  That’s not what I was expecting…”  Paul is basically saying, “Look, there are sinners everywhere and you’re going to have to move to Mars if you want to get away from them.  Let God judge them–you just take care of the Church.”

Or, “Get them into the Church. Then blast away.”  (My paraphrase, not meant to be pastoral advice.)

So we Christians get into a predicament.  God’s good.  God is holy.  God’s wrath is a real thing and we see time and time again through history that he judges wicked nations.

Naturally, we don’t want that for our nation, and yet God, through Paul, tells us, “Don’t worry about ‘them.’  Worry about yourselves.”  From a clear and straightforward reading of the Bible, it sounds a lot like we’re not supposed to judge people who don’t know Christ.

Want to fix the culture?  Do it with the transformative power of the gospel.

Ever feel like you’re beating your head against a wall when you’re trying to explain to a non-Christian why something is immoral?  You know, you try the “Well, it’s wrong because God says it is” and they look at you like you’re nuts?

It’s because you’re talking to someone who is spiritually dead.  They’re not spiritually “sick.”  They don’t need a shot of morality to get their act together.  They’re spiritually dead and dead people generally don’t make the best conversationalists, let alone respond well to judgment.  Just watch the Walking Dead and you’ll quickly learn that if you try to reason with the dead, you’re going to get your face eaten off.

But the good news is that there is a God, that He is alive and active in our world and our lives, and that He cares about His creation.  We’re a sinful, jacked up group of people and we’re hell-bent on destroying the world that God created for us and, for some reason that we’ll never comprehend, God came down in the flesh to patch things back together.

Our first and foremost priority, then, should be to bring people to Christ.

How do we do that?  Let’s look at some facts:

To me, it seems like it would come down to three things:

My Christian friends will recognize the entire Trinity at work in those three points.  Do you get it?  First and foremost, it’s about Jesus.

And you know what?  It’s probably your fault.  And my fault.  And your small group leader’s fault.  And your pastor’s fault.  People are going to Hell because we’re having the wrong conversations and, just like the religious Pharisees, we’re presenting our neighbors with a cheap, watered down version of the gospel.

Christians, let’s get our act together.

Win the culture to Christ.  Don’t let the world distract you and entangle you in the web of deceit.

Special comment policy: Generally, I welcome any and all respectful comments on my blog.  On this post, however, I won’t tolerate a discussion of the morality of homosexuality or gay marriage as it distracts from the core issue.  That includes accusations of hate or bigotry (when in reality I probably have more gay friends than you do) based on my position of faith.  I appreciate your cooperation.  Hugs and kisses, Rob.