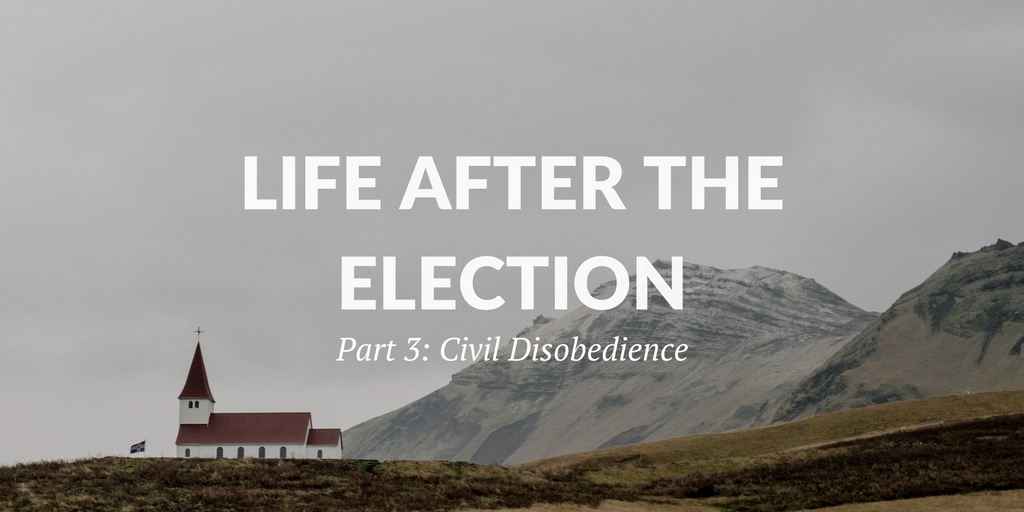 Read the first post, “How to Live on November 9” and the second, “What does being subject to authority look like?”

Over the past few days, we’ve been exploring the biblical command to “be subject to the governing authorities” in a culture that is growing increasingly hostile to Christians.

We discovered that Rome, in a lot of ways, was a lot like the modern day United States.

Rome was an influential political center, led by a series of corrupt and unashamedly anti-Christian rulers. Compared to the rest of the world, Rome was affluent, but had a mixed social class, being made up of people ranging from slaves and the working class to the very wealthy.  Rome’s culture was marked by decadence, sensuality, and immorality.  And Rome was ethnically and religiously diverse.  Everyone worshipped their own gods and tolerated the gods of others so long as you got along and didn’t impose your beliefs on anyone else.

When you look at it, Rome wasn’t much different than the United States, with some key differences.

Shortly before Paul wrote this letter, Jewish Christians had been banned from the city of Rome by Emperor Claudius for disrupting the social order with their refusal to worship pagan gods.

A few years later, they were allowed to return by Emperor Nero, who tolerated Christians for some time, but soon began intensely persecuting them.  And I don’t mean that he asked them to bake a cake.  I mean that according to some historians, he threw them to the dogs, covered them in the equivalent of gasoline, and set them on fire to light his garden at night.

Don’t get me wrong — I’m nervous for the future of the American church and I believe that we are going to see a time in our generation where civil disobedience will be required, but what we are experiencing isn’t remotely close to what believers in the first century were experiencing.

It’s important to recognize that “be subject” doesn’t require blind obedience.  There are some situations in which civil disobedience is justified, and we’ll explore a couple of those situations in this post.

Submission in light of wicked rulers

Because they have been given authority from God, those in positions of authority are themselves accountable to God, and he promises in his word that wicked rulers will be judged.

Isaiah 1:23 — “Your princes are rebels and companions of thieves.  Everyone loves a bribe and runs after gifts.  They do not bring justice to the fatherless and the widow’s cause does not come to them.  Therefore, the Lord declares, the LORD of hosts, the Mighty One of Israel: “Ah, I will get relief from my enemies and avenge myself on my foes…”

2 Corinthians 5:10 — “For we must all appear before the judgment seat of Christ, so that each one may receive what is due for what he has done…”

As Christians who believe the gospel, we know that a day is coming when all will be made right, where perfect justice will once and for all be served, where those who suffer at the hand of unjust rulers will be vindicated, and where the low will be exalted.  Jesus promises in the Sermon on the Mount, “Blessed are those who are persecuted for righteousness’ sake, for theirs is the kingdom of heaven.” — Matthew 5:10.

Paul knew that there is something greater going on in our world.  That the presidential election in America in 2016 is only a passing moment in time, that one day all of this will be forgotten, “There is no remembrance of former things; nor will there be any remembrance of later things yet to be among those who come after.” — Ecc 1:11

Submission in light of civil disobedience

The second question that comes up around being subject to authorities is, “When is civil disobedience justified?”  When can we disobey the authorities?

Sproul, again, puts it this way: “Even if Christians find themselves in the unenviable position of being under the tyranny of an unrighteous and unjust government, they still have a fundamental responsibility to render civil obedience.”

That’s Paul’s message in Romans 13.  But we need to acknowledge that there are exceptions.

John Calvin has a short book called “Institutes of the Christian Religion,” and in it, he describes something known as the “doctrine of the lesser magistrate” in which makes the argument that there are very rare situations in which a wicked ruler becomes so bad that the positions of authority flip and it becomes the people’s responsibility to rise up and overthrow the ruler.

Most American Christians will never be in that position, and that’s not what we’re talking about when we say “civil disobedience.”

Civil disobedience is justified in one of two situations:

And there are many biblical examples of believers who, in specific situations, refused to obey the authorities that were over them.

Acts 4 — Peter and John are healing people in the temple in the name of Jesus, and in doing so, they upset the structure of power and control that the religious rulers maintained.  When the authorities command them to stop preaching the gospel, Peter and John said, Acts 4:19, “Whether it is right in the sight of God to listen to you rather than to God, you must judge, for we cannot but speak of what we have seen and heard.”

Another example is the story of Shadrach, Meshach, and Abednego. Nebuchadnezzar had built an idol and commanded the people to bow to it, which was forbidden for God’s people.  Shadrach, Meshach, and Abednego refused, got tossed into a furnace, came out alive, and through their obedience to the Lord, Nebuchadnezzar ends up praising the Most High God.

Other examples include the Egyptian midwives who refused to kill the male Hebrew children in Exodus 2 and the wise men who refuse to report Jesus to Herod in Matthew 2.

There are scores of examples of civil disobedience in the bible.  Some of those, while righteous, have consequences at the hand of wicked rulers.

And unfortunately, these questions don’t always have clear cut answers. Believers need to, as Paul writes in chapter 12, “by testing… discern what is the will of God, what is good and acceptable and perfect.”

Civil disobedience has a limited scope and must be marked by submission generally and serious and thoughtful disobedience only when you can no longer obey without sinning.