How should Christians live on November 9? 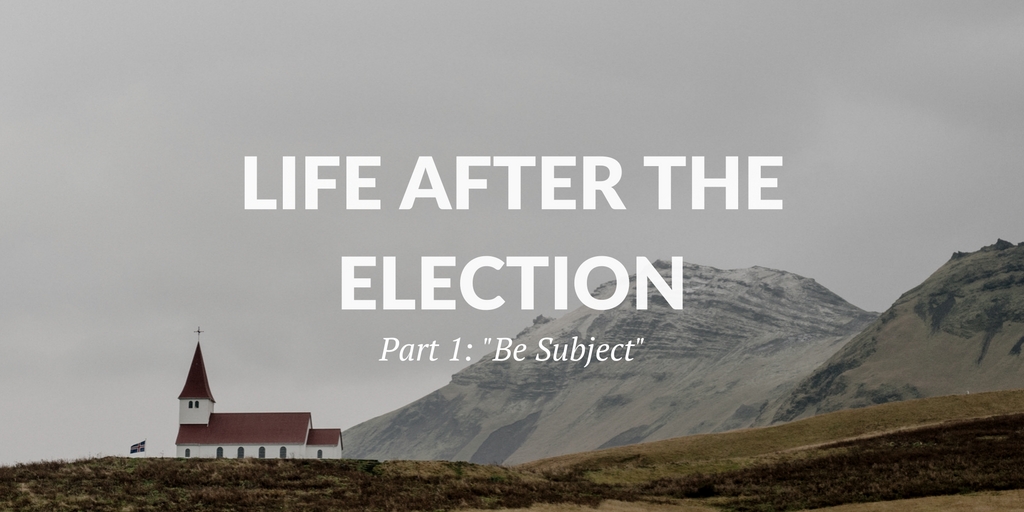 Modern-day Americans, I believe, have trouble with this command for a number of reasons. First, rebellion against authority is a part of our national DNA.  Second, partisan politics creates an “us against them” spirit of contempt and distrust, and it’s difficult to submit to an institution that we don’t trust.

Christians joyfully subject themselves to authority because all authority comes from God.

Romans 13:1 says, “For there is no authority except from God, and those that exist have been instituted by God.”

All human authority is delegated by the one who has ultimate authority.  Jesus says in Matthew 28, “All authority, on heaven and on earth, has been given to me.”

What’s more, God ordains not only the institutions of power but the very people who fill them and it is from God that they get their authority. Daniel 2:21 tells us that “[God] changes times and seasons; [God] removes kings and sets up kings.”  Likewise, Proverbs 8:15-16 says, “By [the Lord] kings reign, and rulers decree what is just; by [the Lord] princes rule, and nobles, all who govern justly.”

What does this mean for the Christian?

This means that God isn’t going to be surprised when the election is over on Tuesday night. He’s not going to be looking down from heaven and shaking his head because we didn’t get his man — or woman — into office.  He has already decided the outcome.

But how you respond on Wednesday morning — whether “your candidate” wins or loses — will reveal what you believe about God’s sovereignty.

Christians joyfully subject themselves to authority because God has created civil authorities for our good.

Romans 13:4-6 says, “[F]or he is God’s servant for your good. But if you do wrong, be afraid, for he does not bear the sword in vain. For he is the servant of God, an avenger who carries out God’s wrath on the wrongdoer. 5 Therefore one must be in subjection, not only to avoid God’s wrath but also for the sake of conscience. 6 For because of this you also pay taxes, for the authorities are ministers of God, attending to this very thing.”

So that begs the question, what is “good?”  Because how you answer this question will affect both your theology and your political position.

On one hand, as Christians, we know that the best possible thing for anyone, regardless of their situation, is to know Jesus.  On the other hand, there are people with real and tangible needs now.  One-in-eight Americans doesn’t have enough to eat. On any given night, more than half a million people experience homelessness.  Between 600,000 and 800,000 people are trafficked across international borders in the U.S. every year, 80% of whom are women and half of whom are children.

These is a great deal of tension between these two issues, particularly in a secular nation.  But one thing is clear from this passage.  God’s design for civil authorities is the flourishing of people under those authorities.  That includes Christians and non-Christians alike.  Governments are a means of God’s common grace for all people.

Christians, specifically, because they are one with Christ in both his exaltation and his suffering, must sometimes sacrifice that which is in their self-interest for the good and flourishing of others.

Christians joyfully subject themselves to authorities because they trust the highest authority.

At the end of the day, Christians find the power to submit to the command to “be subject to the governing authorities” not in the shifting sands of politics or public opinion, but by resting in the knowledge that God has created positions of authority and that he has done so to promote that which is good among his people.  God’s ultimate end, we know, is for the glory of his name, and God is most glorified when we subject ourselves to the authorities that he has created for us.

This raises some important questions.  What does “being subject” look like?  What about subjection to wicked rulers?  When can we disobey unjust laws?

These will be the subjects of my next posts.