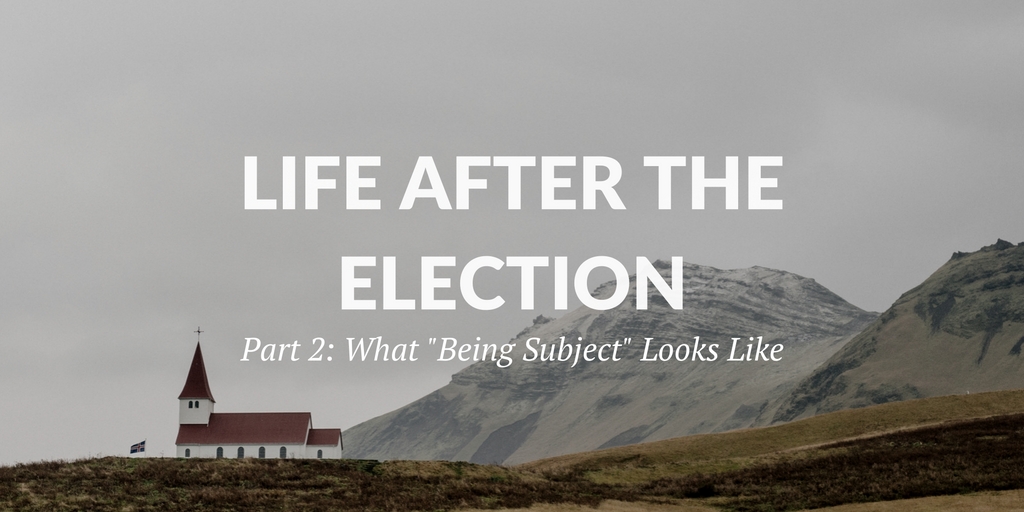 Read the first post, “How to Live on November 9.”

We saw in my last post that Christians are commanded to “be subject to the governing authorities.”  We learned that we find the power to be subject to our civil government by trusting in God who appoints authorities for the good of all people.

But that begs the question…  What does “being subject” look like, particularly in light of yesterday’s election?  To discover the answer to that question, we turn again to Romans 13.

Being subject to civil authority means to obey the law

If all authority that exists is ordained by God himself, that means that resisting the authorities is rebelling against God himself.

It says as much in Romans 13:2 — “Therefore whoever resists the authorities resists what God has appointed, and those who resist will incur judgment. For rulers are not a terror to good conduct, but to bad.”

Like Matt Chandler points out, “This simply means that my daughter has never been grounded for making her bed.”  Generally speaking, Christians are expected to obey civil laws.  We’ll explore instances in which civil disobedience is justified in a future post.

But in most cases, when a believer refuses to be subject to civil authority in this area, he or she is refusing to be subject to God.  And those who refuse to subject themselves to the governing authorities will be held accountable.

Paul says in verse 4, “But if you do wrong, be afraid, for he does not bear the sword in vain,” verse 5, that he is “an avenger who carries out God’s wrath on the wrongdoer.”

Unsurprisingly, this is a point with which my conservative and libertarian brothers and sisters tend to have some difficulty.  Romans 13:6 says, “For because of this you also pay taxes, for the authorities are ministers of God, attending to this very thing.”

“This very thing,” as we learned in my last post, is the care for and investment in the people who have been entrusted to the government’s care.

Again, as we will explore in an upcoming post, there are exceptions to this principle, but the baseline is this: Christians should pay taxes to support the government’s provision for those in need.

Being subject to civil authorities in a representative democracy

The audience to whom Paul is writing is made up of believers in 1st Century Rome.  The Roman government at the time was marked by two things: it was oppressive for Christians and Christians had no influence in politics.

In a representative democracy, however, citizens become a part of the governing authorities.  This means two things:

In a representative democracy, citizens share in the authority.

As an American citizen, God has given you the authority to influence the laws that affect the people in your nation and your community.  While our elected officials have direct influence over the laws that are passed, it is the people who put them into those positions of influence.

In a tangible way, has given the people the authority to “remove kings and set up kings” — Daniel 2.  If we have a wicked ruler, the people put him there, and the people are accountable to God for their actions.

In a representative democracy, citizens share in the responsibility for caring for one another.

God has delegated authority to you and he expects you to use that authority for the good of your neighbor. Have you considered your vote to be a means of loving your neighbor as yourself?

In our next post, we’ll address some of the nuances of being subject to civil authorities.