﻿Why Living in the White Space is So Hard 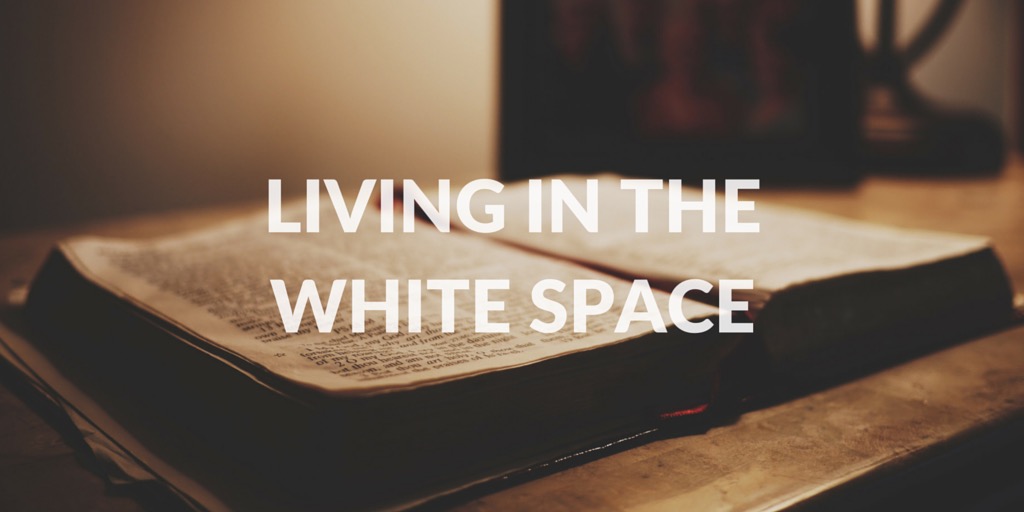 Pastor J.D. Greear often talks about the “white space” in the stories of biblical superstars. A “white space” is a literal gap in the words of Scripture — a paragraph break, a gap between chapters — where a period of time passes between a promise that God has made or a task that he has given his people and the time that thing actually takes place.

David had one, right in the middle of 1 Samuel 16. David had been anointed king of Israel, but instead of being thrust into the spotlight to fulfill the role that God had called him to seven years pass and all we have is a white space in the pages of Scripture.

Paul, the uncontested champion of missions and evangelism, has one, too, right in the middle of Acts 9. Jesus had saved him in a spectacular display, knocking him off his horse on the road to Damascus, blinding him, and commissioning him as an apostle to the Gentiles. In Paul’s white space, 17 years pass before he fully steps into the mission that God had for him.

What did they do in the white spaces? They waited. They faithfully served in the places where God had placed them. And all the while, God was preparing their hearts for what the vision and the mission that he had called them into.

Are you in a white space?

Are you in a white space right now? Perhaps God has given you a glimpse of what he has in store for you and your ministry, but it seems like you’re “stuck” and going nowhere fast.

If that feels all too familiar to you, you may be in a white space.

Before you ask what makes me an expert on living in the white space, it’s because I’m living in a white space, too. Six years ago, having been saved no more than three weeks, the Lord laid on my heart the call to plant a church. And he’s brought me through many pastures as he has prepared me for that calling. From sharing the gospel with fifth and sixth graders at The Summit Church, to discipling young men at the Boy Scout camp where I spent my summers, to pastoring a wonderful church family at The Gathering Church, the six years that have passed since God has given me the vision to plant a church have felt more like being stuck in rush hour traffic — patiently enduring stop and go traffic, with more stopping than going, as I press on toward my destination — than cruising effortlessly into my calling.

But with every stop along the way, the Lord has prepared my heart, head, and hands to become the man that he has called me to be.

Here are three reasons that make living in the white space so hard.

Why does pride make living in the white space difficult? Pride leads us to believe that we know better than God — that our plans are somehow better than his plans, and that we are smart enough, good enough, prepared enough, and talented enough to carry out the great mission that Jesus has called each of us to.

The antidote to pride is looking at all of the faithful men and women of God that God brought through the white space as he prepared them for his mission. Noah. Abraham. David. Paul.

And those who tried to skip the white space? They experienced tragic moral failures. Think Samson, Solomon, Saul… (Apparently, you’re at greater risk if your name begins with S.)

Impatience is the second reason that living in the white space is so difficult. Impatience is really a manifestation of a lack of faith. Faith is hope in the promise of things unseen, and when we don’t see what God is doing in our white space, we tend to throw up our hands and give up on what we once believed that God had called us to.

This showed up in a major way in my life not so long ago. Once upon a time, God had given me a very clear call and passion to plant a church — so much so that I asked my wife before she married me if she was okay marrying a church planter. (In case you’re wondering, she said yes!)

My compromise wasn’t based on anything other than my impatience and my inability to see what God was doing in my white space. Where I expected immediate results, God was working slowly and deliberately in my heart.

If you’re anything like me, you’re not going to like what I have to say about the cure for impatience. The only cure for impatience is patiently waiting. We type A folks don’t like waiting. We like to have our plan laid out, and we like to see our plans moving forward a little more everyday. But God doesn’t always work like that, and sometimes he puts you in the white space to remind you that he is doing something while you wait.

A third reason that living in the white space is difficult is shortsightedness, or a lack of vision. If we don’t yet clearly understand what God has called us to — if we don’t have a target to aim at as we wait patiently for God to give us the green light — it becomes harder and harder to wait. We become restless, wandering to and fro as we try to figure out what, exactly, we’re supposed to be doing with our lives.

This one hit me hard, too, and it wasn’t until a recent trip to Atlanta and visits to NAMB and a vibrant church plant that rekindled my passion and desire to plant a church and reminded me of the calling that God had put into my heart many years ago.

When I got back from my trip and excitedly shared what God had taught me during my time away, my wife seemed unsurprised. She gently reminded me of all of the times that we had discussed where God was leading our family. I had lost sight of my vision, but my wife had not.

A good step in curing shortsightedness is to break out of your routine and spend time with the Lord, reflecting on how he has gifted you, the passions he has given you, and the experiences that he has brought you through, so that you may know what he wants you to do in your current season of your life, and what he may have for you in the next.

What’s your white space? What vision has God given you for your life and ministry that you have yet to experience?

More importantly, how are you learning to trust God better during your season of waiting?