Young Leaders of the Bible: Part 2 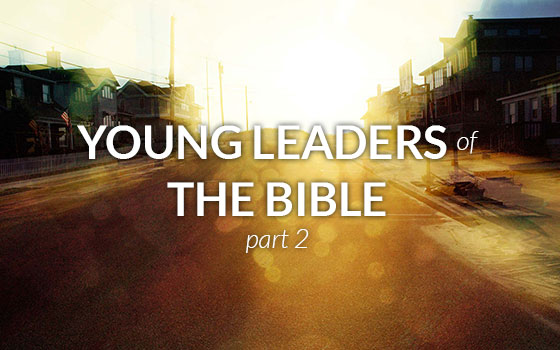 In our last post, we looked at three young leaders from the Old Testament. Each of these young leaders were called by God to be used for great works in His plan for redeeming mankind.

In today’s post, we’re going to look at several young leaders from the New Testament of the bible.

While walking by the Sea of Galilee, he saw two brothers, Simon (who is called Peter) and Andrew his brother, casting a net into the sea, for they were fishermen. And he said to them, “Follow me, and I will make you fishers of men.” Immediately they left their nets and followed him. And going on from there he saw two other brothers, James the son of Zebedee and John his brother, in the boat with Zebedee their father, mending their nets, and he called them. Immediately they left the boat and their father and followed him. – Matthew 4:18-22

We don’t know how old, exactly, the twelve disciples were when Jesus called them; the bible doesn’t say.  Some may have been in their twenties, most scholars believe that most of the disciples were under the age of 18.

During their ministry with Jesus, the twelve disciples made their fair share of mistakes.  But after three and a half years ministering with Jesus, God would use them to write the New Testament and to build His Church.

The angel answered her, “The Holy Spirit will come upon you, and the power of the Most High will overshadow you; therefore the child to be born will be called holy—the Son of God. 38 And Mary said, “Behold, I am the servant of the Lord; let it be to me according to your word.” – Luke 1:35, 38

Mary was just a teen girl when an angel of God announced to her that she would be the mother of the promised Messiah for whom the world was waiting. God’s call on her life came at great personal cost–particularly her reputation as an unwed mother–but it came with great honor and great joy.

Two things we learn from Mary: first, you don’t need to be formally designated a “leader” to lead.  Second, God uses all people–men and women alike–for His purposes.

Paul came also to Derbe and to Lystra. A disciple was there, named Timothy, the son of a Jewish woman who was a believer, but his father was a Greek. He was well spoken of by the brothers at Lystra and Iconium. Paul wanted Timothy to accompany him, and he took him and circumcised him because of the Jews who were in those places, for they all knew that his father was a Greek. As they went on their way through the cities, they delivered to them for observance the decisions that had been reached by the apostles and elders who were in Jerusalem. So the churches were strengthened in the faith, and they increased in numbers daily. – Acts 16:1-5

Timothy was probably in his late teens when he was asked by Paul to join him on his missionary journey.  Coming from a complicated family background, Timothy had some obstacles to overcome in his ministry–particularly, earning his credibility with those to whom he was ministering.

Timothy’s good reputation preceded him, however, and he would go on to be appointed by Paul to pastor the church at Ephesus into his old age.

What opportunities has God given you to lead?

God’s people are called, equipped, and gifted by the Holy Spirit to build up Jesus’ Church.  Not everyone is called to leadership, but every Christian is valuable to God and integral in building up His Church.

Has God given you the desire to lead?  Is he guiding your toward leadership positions inside or outside the Church?  How can you pursue your calling to love and serve your brothers and sisters through leadership?